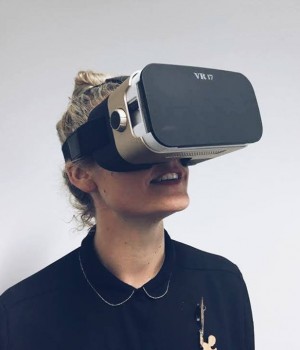 Work has started to set up a national virtual reality complex in Wellington, its newly-appointed centre director has revealed.

Jessica Manins says the complex, named ProjectR, will bring together the nation’s top businesses and researchers to develop and test world-first uses for virtual and augmented reality.

Virtual reality is a 3D computer-generated simulation of real life, which the user is immersed in digitally. Augmented reality superimposes digital information on the world around us, such as holograms.

Manins says both technologies have a huge range of applications, including entertainment, business, medicine, education, architecture and government.

What is in the works?

A feasibility study for ProjectR has begun, which will include developing designs for the state-of-the-art complex, and has been funded by some Wellington-based IT and technology businesses, who are collaborating on the project.

“Discussions about the complex are ongoing with industry groups, tertiary institutions and businesses,” Manins said.

“We want to make sure it’s fully collaborative and that we’ve talked to all the right people before firmer decisions on structure and capability are made.”

The current goal is to get operational on an initial site in September this year and have the complex’s full facilities in place by early next year.

Designs for the state-of-the-art complex are being developed at present with initial plans to include two demonstration theatres, a start-up software suite with tools to create new applications, a conference room and desks for about 24 people.

Manins, the former regional director at Wellington techhub BizDojo, has hands-on knowledge of industry collaboration, a vital feature of the proposed reality centre. She has also spent almost a decade with online talent startup StarNow, so is familiar with the development process, developers, project management and strategic business skills that are needed to oversee work to bring ProjectR to life.

How does Wellington benefit from this project?

“This new national virtual and augmented reality centre will boost the capital’s reputation as an internationally acclaimed hub of digital innovation,” says Manins.

“It will cement the film and gaming industries in Wellington, foster global partnerships, attract overseas talent and create jobs,” she says.

She says the need to develop such a centre is highlighted by a report released this month that contains comments by Spark’s managing director Simon Moutter on accelerating New Zealand’s technological progress.

‘Unleashing New Zealand’s Potential – Faster’ is about an innovation mission by 55 Kiwi delegates to Israel that was headed by Moutter in May and facilitated by the Trans-Tasman Business Circle.

“My hope is that this report will ‘spark’ conversations and help engage New Zealand’s business sector, universities and government in a more concerted and collaborative effort to accelerate the rate of technological innovation in New Zealand and its associated economic success,” he wrote in the report.

David Jones, Business Growth and Innovation General Manager at WREDA, says, “It’s a bold move to open a centre dedicated entirely to new reality technology. But in Wellington, we seem to like to turn the near impossible into reality.

“Over the past few years, virtual and augmented reality have emerged as a speciality of the capital’s tech and screen sectors, and Projectr is the next logical step in growing capability, driving innovation and showing what’s possible in this new world.

“We also expect Projectr to attract international students, create jobs and investment, and enable collaboration between the tertiary, industry and corporate worlds.

“Projectr will be a hub where people can experience the sharp edge of technology and have their minds opened to endless new possibilities.”

What does ProjectR mean for Australasia at large?

“The public is most familiar with virtual reality technology through the film and gaming industries, areas in which Wellington is a global leader, but it also has compelling applications in industries that you might not expect like real estate or medicine,” Manins highlighted.

“A complex like ProjectR will give Australasia the resources and facilities needed to build solutions to global problems and remain competitive on the global stage as more industries adopt VR.

“It will also create opportunities for tech talent and investors that recognise the commercial potential in virtual and augmented reality and undoubtedly draw more attention to Wellington and Australasia as a business prospect.”