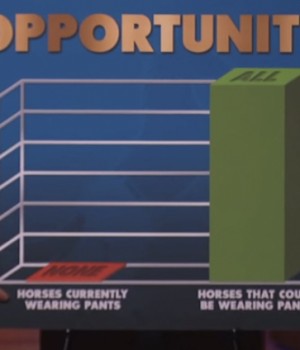 Jimmy Kimmel is a U.S. talk show host. He first came to my attention when his then girlfriend, Sarah Silverman, sang a song about Matt Damon and breaking up with Kimmel. What followed was not only comedic gold but, also pitched Damon against his old buddy, Ben Affleck.

I digress. Kimmel is big in the U.S. but not so well know here in Australia.

He decided to take a crack at pitching his startup to create Horse Pants on the U.S. startup pitching show, Shark Tank.

Frankly, when I was sitting on the VC side of the fence during the dotcom 1.0 boom, I saw pitches that were worse than this. For ideas that weren’t as well formed as this.

While it’s Kimmel in a full-swimg comedy routine, you can’t help but notice his pitch sticks to a structure that many real startups follow. He identified a market gap (granted, he may not have tested if it was a problem worth solving) and, he designed a solution. He also knows he has no competitors, has sized the market and thus, as made an interesting valuation on his business.