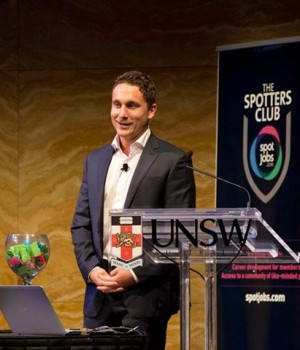 Jake was frustrated as a school leaver looking for work to make money for schoolies.

Determined to fill what he considered a glaring gap in the online job board market, he started his first business, SpotJobs in 2012, with the help of some venture capital backing.

“Our uniqueness is just that – a dedicated platform for entry-mid level positions; jobs that don’t require certain tertiary qualifications such as retail, hospitality, admin, labour.”

Jake revealed to Anthill that right from the very start, he faced the uphill task of altering the impression that SpotJobs would not work as effectively as the mainstream means of recruitment, which most employers were already comfortable with.

“We re-educated the market that not only were we as good as job boards such as Seek, that we were in fact the default job board for employers seeking entry-mid level positions.”

“We overcame this by targeting entry-level job hunters through both above and below-the-line marketing, and then having a one-on-one sit down with every employer to identify their opportunity in accessing truly skilled employees in our database,” he added.

SpotJobs puts great effort in marketing itself – from traditional advertising such as TV commercials and billboards, to cross-collaborations with companies such as Uber, to social media, to sending out a SpotJobs Easter bunny to climb the Sky Tower.

In less than 18 months of operating, SpotJobs has gained over half a million users and become the fourth biggest job board in Australia in terms of hits, behind giants Seek, MyCareer and CareerOne.

Jakes said that although he feels he hasn’t achieved the level of success with his business that he would like reach, he is very proud of what he and his team have achieved so far.

Extrasensory perception also often referred to as a sixth sense is my superpower – the reception of information through the mind, and the ability to make educated assumptions. This super-power has served me well when it comes to hiring the right employers for our own business, understanding what clients need most for their business, and which direction our business needs to be heading in.

Use the Tweet button at the top of this page. Your tweet will say: Congratulations Jake Williams, Anthill 2014 30under30 winner!