The business futurist says the future is looking bright for Aussie entrepreneurs just like you -
Friday, September 17, 2021 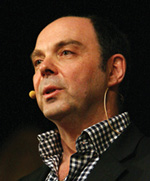 Morris Miselowski has an eye on the future.

As a matter of fact, he’s a  business futurist; that is, he specialises in using science to make predictions about the future, particularly with regard to the way we will live, work, and play in the coming years.

And, what he thinks is in store for Australia will surprise you. Anthill recently caught up with Miselowski to ask him about what the future holds. In our discussion, he proved insightful, informed, and only cautiously optimistic about the future of jobs, careers, and life in Australia and elsewhere.

The future of working in Australia

We’ve been hearing a lot of doom and gloom around disappearing jobs and industries in Australia, and certainly the average person has every reason to be concerned. But, in talking with Miselowski, you quickly arrive at the glass half empty/glass half full paradox.

As he points out, on the other side of 6-percent unemployment is 94-percent employment. That’s an optimistic way of looking at things, but he is also realistic about drawing conclusion based on such recognitions.

“The stuff that we’ve been through in the last five or six years {Referring to the GFC} really masks underneath it a huge structural shift in work, in employment – in business in general – that we would have went through anyway,” Miselowski stated.

“That’s a sort of new ‘Industrial Revolution’ that I often talk about. When you put the two things together, you end up with people wrongly thinking that the world is ending, all doom and gloom.”

Among other things, Miselowski’s website focuses on career prospects. His blog keeps up with emerging demands across job sectors, and Morris predicts what the future holds for workers, based on the data that he gathers. His research results in fascinating articles like Morris’ “The World of #Jobs”; “What’s Over the Job and Career Horizon?” and “What Future Career Would You Bet On?”
In his writings, Morris presents the intriguing idea that changing jobs is becoming the new norm.

What’s the future of entrepreneurship?

Miselowski’s blog posts have a wealth of information on which roles will emerge as the most valuable over the coming years, but what we most wanted to learn from Morris is what the future might have in store for entrepreneurs.

“The over-arching thing is that we are still coming to terms with the digital space,” he said.

“We have changed just about everything in this space. On the notion of capital raising, it used to be done in a very traditional sense. We would create a document. That document would reflect why we think we are a worthy candidate for credit, and we would take that document to a financial institution that would either give you the credit or not.”

He went on to explain how crowdfunding is changing that.

“That need is falling away for tomorrow’s entrepreneurs.They are able to go to a much broader marketplace to finance their business or idea or product. They are also able to draw information from a lot of places, from Australia and across the world.”

The democratisation of the business sector, Miselowski attests, is giving rise to a bright future of non-mainstream thinking and innovation that would not have been possible prior to the advent of the digital space.

According to him, entrepreneurs play a big role in the future economy.

The future of tech on the horizon

The difficulty, he tells us, is in keeping up. These developments are facilitated by changes in cost and culture, which is helping bring more technologies to market than ever, according to him.

“The thing I love most about 3D printing is where I see it being used in medicine. We are on the cusp of doing incredible things in medicine with 3D printing,” Miselowski explained.

“We are seeing children born with faulty tracheae being able to get new ones with 3D printing within weeks of birth.”

Miselowski is also a prolific public speaker and dynamic presenter. He was featured at TedXMelbourne recently, where he presented a speech entitled “Unlearn the future.” Like everything Morris is attached to, it’s informative and visionary.