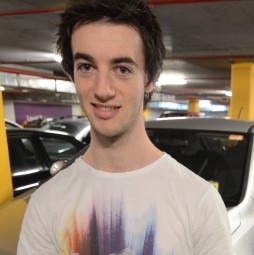 To be Brandon Cowan is to love PR. Never one to settle for a boilerplate media release, the 18-year-old founder of Crazy Dog Apps knows how to whip up a media frenzy with virtually every new smartphone app he releases.

He’s also aware that he has two things going very much in his favour: the media love apps, and they love apps designed by young folk.

In 2011, Cowan made the rounds on the telly and radio for the first time (including his first 30under30 win) with iParkedHere, an app for the absent-minded shopper in all of us. That app took the lead from GPS, throwing in camera technology and other memory devices including a timer, to make it easy for car park wanderers to relocate their vehicles. At its peak, iParkedHere tallied 20,000 downloads in a single week.

As he wraps up high school, Cowan has cranked up the volume, working with developers and on his own to turn dozens of ideas into apps, three of which have made it into the coveted top 100 downloads on iTunes.

“My apps change lives for the better,” Cowan proudly declares.

His followup ‘hit’ was PetRescue, an iOS app that works in conjunction with the animal adoption not-for-profit of the same name to locate pets in nearby shelters in need of new homes. Cowan says he charged nothing to develop the program for Pet Rescue.  Another perfect media storm ensued, and the app now gets downloaded, on average, once every ten minutes.

The latest offerings from Crazy Dog Next demonstrate a growing versatility. AUSBUY enables you to scan the barcode of any supermarket product to see if it was grown or made in Australia. And the brand-new Gravityicons, an arcade adaptation for the iPhone and iPad, is convincing proof that the Crazy Dog team got game as well.

Clearly, Karl Stefanovic was on to something when he told Cowan on the Today Show that his “future is already mapped out.” Cowan knows his blueprint for success: building a better world through bigger and cooler apps.

My determination, passion, strong-will and stubbornness to never give up is my super power. I see no reason to ever give up on a great idea, despite challenges that may be faced on the way. Challenges are made to be overcome just like rules are made to be broken by those who are different. Being ‘normal’ would be boring. Additionally, I love failing almost as much as succeeding! Failing teaches lessons that are learnt to prevent the same mistakes being made in ‘bigger’ situations.