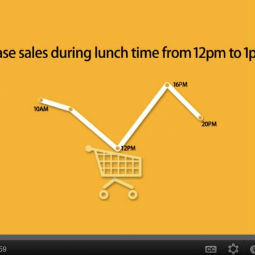 In Korea, E-mart stores dot the landscape. Just how big is this network of stores?

Well, a few years ago, the franchise took over the local Walmart’s and turned them into E-marts. Now, 141 E-mart stores can be found in Korea, and China is next in line. With 22 stores already open on the mainland.

So, they’re big. Yet, despite the store’s huge success, there was a problem. Sales peaked at the start and end of the day. The middle of the day was slow. Very slow. Ghost-town kind of slow.

The staff still had to be there but the volume of sales was extremely low. It was far from the most profitable time of the day. Overall, slow lunch time sales were creating a gaping hole in the operating model.

Part of the solution was very ordinary: offering coupons and discounts for shoppers who purchase during this dead time. However, what was done to promote these offers was far from ordinary.

A three dimensional QR code was created. Only at midday, when the shadows and light were just right, did it become viewable as a QR code. Only customers who viewed the site behind the QR code were given access to the coupons, sales and discounts items.

It’s not the first innovative marketing for groceries to come out of Korea. Check out the second video below of the Homeplus Subway Virtual Store.

Two videos in the one post? That’s the kind of crazy midday discount offer you’d expect from a Sunny Day E-mart promotion.