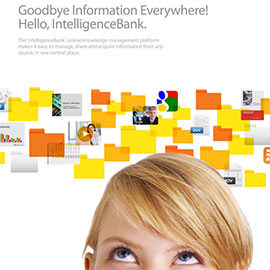 IntelligenceBank, a four-year-old startup that helps enterprises aggregate company-wide data in a central cloud in easy-to-access fashion, has closed a $2 million funding round led by the Melbourne venture firm Kings of the Jungle (KOTJ).

The Melbourne company – founded by Tessa Court and her husband Peter – said the round includes an initial investment of $1.1 million, with an option to raise it to $2 million.

IntelligenceBank plans to use the capital to execute on the company’s product roadmap, and to expand its distribution channels globally.

“Over the past three years, we have proven market fit and have built a profitable company. Our challenge now is to scale. We aim to do this by building out an online sales channel,” Tessa Court told Anthill.

“We have developed a scalable technology platform delivering niche, ‘out of the box’ business apps including Board Portals, Brand Hubs, Customer Platforms and Data Rooms,” added the America-born Court, who moved to Australia in 1999.

IntelligenceBank operates in a global SaaS market estimated to be worth $75 billion in 2014, according to Forrester Research. Its clients include Suncorp, Ballarat Regional Tourism, Nokia and National Australia Bank. Besides Australia and New Zealand, it has clients in Asia, Europe and the United States, where it has opened an office in New York.

Key is to develop niche apps to meet specific needs

Tessa Court has significant startup experience even though IntelligenceBank is the first of her very own. She and Peter scoped out the idea for it from Streetscope, a market research firm where Peter worked. IntelligenceBank’s technology helps companies get diverse data and documents under one umbrella, helping its executives access the information with ease.

“When I started IntelligenceBank, I wanted to create a platform that made it easy to share and manage any kind of document or data asset. So we developed a very robust ‘information management’ platform,” she recalled. “However, we discovered over the years, hence the proverbial pivot, that while all businesses need a tool like IntelligenceBank – no one buys ‘Information Management.’ Rather, people purchase specific solutions such as Digital Asset Management, Data Rooms, Board Portals, Conflict of Interest Registers and more. As a result, we are still investing and building on our base platform, but have productised a range of niche business apps to meet specific market needs.”

IntelligenceBank is a 2013 graduate of the Springboard Technology Accelerator program for women-led technology companies. This year, it was listed in Deloitte Asia Pacific’s Fast500 Technology Business ranking.

In 2010, IntelligenceBank was awarded “Best New Business” and “Business of the Year” by Melbourne’s Business3000 Awards.