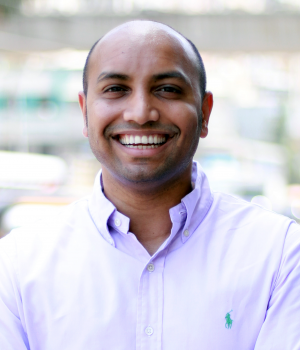 InstaReM is one of many startups operating in the fintech space at present, as emerging technology and bright ideas continue to place pressure on traditional banking and finance models.

The company was conceived as a way of transferring money without the cost and delays associated with traditional international bank transfers, and initially sought to provide Indian expats in Australia with a cost-effective means of sending money to family back home.

In a case of some serious serendipity, co-founder and CEO, Prajit Nanu, was tasked with organising a friend’s bucks party in Thailand, and found that there was a frustrating stumbling block when the time came to pay for the accommodation. Living in India at the time, he was unable to send money across to Thailand without jumping through a whole lot of hoops.

“I called the villa, told them to take my credit card number, and deduct the payment. They said that won’t be possible, and they wanted me to send it to their account as a bank-to-bank transfer. I called up my priority relationship manager at the HDFC Bank in Mumbai for help. He asked me to fill out a lot of documentation.”

What is the inspiration behind InstaReM?

In very modern-day style, Prajit happened to be bemoaning the painful process on social media, which brought his plight to the attention of an old school-friend, who was working on a project in Thailand at the time. Prajit simply sent the money to him, and he in turn transferred it to his local bank, thus saving the FX and transaction fees.

When transacting between traditional finance institutions, Prajit feels there is a lack of transparency on the final crediting amount that the recipient will receive. Small businesses and individuals only have a preview of the currency conversion rate and transaction fees.

There’s also a hidden FX spread, which is the difference between the wholesale inter-bank FX rate and the rate quoted by the bank or international money transfer company. The end result for a consumer is an inter-bank rate minus an FX spread, plus fees.

This disparity and lack of transparency sowed the seeds of an idea with Prajit, and managed to ruin his holiday in Thailand at the same time.

“It was a terrible holiday, as I spent my entire time thinking about this notion of transferring money without incurring FX fees,” he said. “An ex-colleague from London, Michael Bermingham, happened to work in the field of FX compliance, which is the most important thing when we talk about cross-border payments. So we got together and said, okay, let’s do it.”

What is InstaReM doing differently?

InstaReM became a serious disruptor in the fintech through the simple act of charging a transparent transaction fee, and removing the FX spread. This fee is shown before a consumer makes the remittance, unlike banks or traditional remittance firms which charge the FX spread in addition to the transaction fee, and remit whatever percentage remains. This means that the sender will know exactly how much the recipient will receive before he or she makes the remittance.

“It seems so simple, but we really removed a very annoying hurdle in the process of sending and receiving money,” explains Prajit.

The company started in January 2014, and was incorporated in Singapore in August 2014. The first ‘corridor’ for international payments was between Australia and India, in response to a lot of local requests.

“When we were raising capital in the very early stages, a lot of people came up to us and asked why not start your business in Australia? Years ago, someone published an article about how sending money from Australia to India was ridiculously expensive, and that it can cost six to seven percent to send money out of the country. We really felt that it was a good market because there is a lot of migration, and a large contingent of Indians living and working there. We agreed, and saw it as a great opportunity for us to set up business there.”

The payment channel between Australia and India has since grown to be a sizable corridor, worth roughly $2 billion. As an early ‘disruptor’ in the remittance space, InstaReM controls a double-digit market share of the corridor, making it an extremely important and lucrative market for the startup.

How is InstaReM doing so far?

InstaReM has grown extremely quickly, from the early stages of the company’s conception. A Series A funding round of $500,000 gave them impetus to develop the platform and initiate a sales plan. Staff were hired from all walks of life, a fact that Prajit feels is important to the company’s success.

“We are different from many startups, in that our staff come from diverse backgrounds and in some cases have extensive experience in the traditional finance fields. Our Chief Business Officer is 50 years old and has been in C-suite roles in consumer business – such as being CFO for Standard Chartered’s Global risk business. These people help us push boundaries and work with the finance industry regulators,” said Prajit.

InstaReM moved to secure their Series B funding round in June 2017, with an investment of US$13 million. The injection of funds will increase the company’s payment corridors from 150 to somewhere near 2000, allowing access to a host of new markets.

Again, a diverse workforce that is well equipped to deal with a wide variety of issues and use their experience to overcome obstacles in those emerging countries is imperative, with staff expected to rise to 130 employees by year’s end.

“We want our people to be able to really understand their markets, and pre-empt the problems and frustrations that our customers might be experiencing with traditional finance models. Our strength will remain our ability to see a system that is set up to help large institutions, and turn it into something that is set up to help people,” Prajit explains.

InstaReM’s Australian headquarters are based on the Gold Coast, headed up by one of the four initial staff members at the company, Blaine Fabi.