FLIP SCREEN AUSTRALIA
As a nation of ‘inventors’, Australians have plenty of ideas. Unfortunately, that’s the easy part. Creating a successful prototype and turning it into an international business is something else. Flip Screen Australia’s success turning dirt (and therefore its innovation) into a profitable company caused our judges to ‘flip out’ and land it with the Innovation Award accolade. 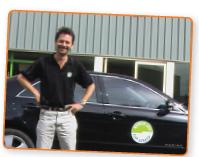 Anthill Magazine is overwhelmed with examples of Aussie ingenuity on a daily basis. The Cool Company Awards are no different in their ability to attract innovation applications.

The Flip Screen is a portable machine that fits to various sized excavators, wheel loaders, backhoes and skid steers and can be used to segregate materials in an almost unlimited range of applications and industries, such as screening demolition debris to recover clean soil, recovering reusable scrap steel from contaminant, backfilling pipelines, sizing gravel and sandstone in quarries, grading landscape supplies, preparing construction sites, removing contaminants from coal, recycling railway ballast onsite… the list goes on and on.

Managing Director and inventor of the Flip Screen, Sam Turnbull, identified the need for a portable screening solution while running his own excavation business in Sydney. After 16 years trying, he managed to “crack the nut” to much acclaim in 2003, when he won three prestigious awards including Invention of the Year (Henty Machinery Field Days), Inventor of the Year (Australian National Field Days) and Top Inventor (Canberra Royal Show).

In June 2004, the Flip Screen also made its TV debut on ABC’s The New Inventors, where it was named Winner by the judges and also won the program’s People’s Choice Award. The next day Turnbull’s mobile message box was full to capacity; he had received over 100 emails from people asking about the Flip Screen, 20 faxes and an order for one Flip Screen, irrespective of price.

At a time when online innovation and university R&D are de rigour, it was clear to our judges that Turnbull had ‘unearthed’ a winner. 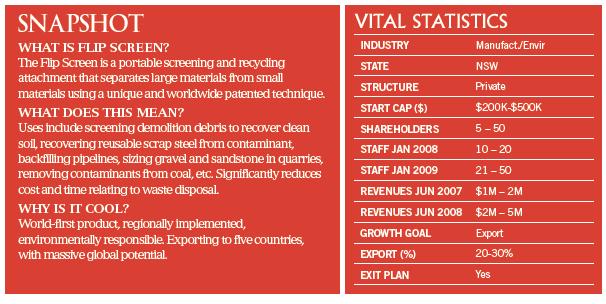