A couple of days ago, we shared with you a cheeky ad with a sober message — Australian women receive nearly 17% less pay for the same tasks.

The video below makes the same point. But it’s, um, cheekier.

In the interests of full exposition (and for those of you who have already hit the “play” button and are, a) laughing nervously, b) yelling “check this out!” to your cubicle-mates, or c) irrigating your eyes with rubbing alcohol), this video was not created by Australia’s Economic Security4Women, which authored the earlier video.

No, this should-be-retirees booty-shaker is the work of Zij-Kant, a women’s rights organisation in Flanders, Belgium. The point of the video is presented at its finish: Getting paid less equals having to work longer.

For those of you who don’t recognise the satire (and for those of you who do — for shame), the video is based on the Benny Benassi video “Satisfaction.” Zij-Kant simply replaced the barely clad young women with, um, veterans. Or, as a Zij-Kant news release describes it: “The babes have become old women who are still doing the same work.”

The Belgian group and Economic Security4Women both are promoting Equal Pay Day on March 25. It’s not a random date. According to statistics, women have to work about 15 months to earn what men get in a year. 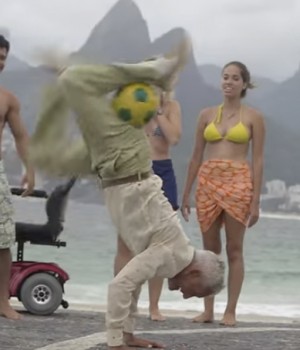