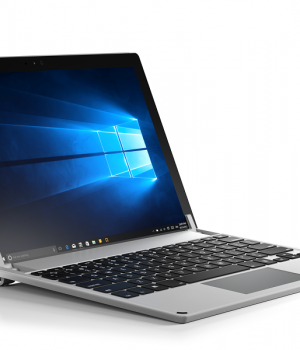 Brydge, the company that set a new benchmark for iPad keyboards around the world, is proud to launch its first keyboard for the Microsoft Surface Pro in Australia.

The Brydge 12.3 (RRP$249), which was named a CES 2017 Innovation Awards Honoree earlier this year when it launched in the U.S., is now available at JB Hifi and selected Harvey Norman stores around the country.

Headed up by Australian duo, Nicholas Smith and Toby Mander­Jones, who have transformed Brydge into a multi-­million dollar operation that sells in more than 100 countries, Brydge made its mark initially by designing and delivering innovative keyboards for iPads.

What exactly does the Brydge have to offer?

Unlike any other keyboard on the market, the Brydge 12.3, transforms the Surface into the ultimate laptop. It is the only keyboard for the Microsoft Surface Pro that removes the dependency of a kickstand, allowing the user to have a full laptop-­like experience. Marketed as the perfect laptop-­tablet hybrid, the Brydge 12.3 brings a 100 percent aluminium body with a full backlit keyboard, 180-­degree screen rotation and adaptive trackpad to the Microsoft Surface. Brydge has also released a model with 128gb integrated storage – currently available via its website.

“Surface users have been waiting for a powerful and complementary keyboard like the Brydge 12.3,” says Brydge Managing Director, Toby Mander­Jones. “The Surface is a powerful and versatile device that deserves a keyboard that unlocks its true potential.” he said.

Mander-Jones believes the Brydge 12.3 provides Surface users with a keyboard that has greater functionality than the entry-­level model and at a better price than the Surface Book. “The combination of the Brydge 12.3 and Surface creates a game-­changing package that transforms the Surface into a true laptop replacement and the ultimate in mobile computing for Windows users,” he said.

What is the story behind Brydge?

Recognising that the natural limitation of the tablet was the on-screen typing experience, Brydge launched with one of the most successful Kickstarter campaigns of 2012. After raising US$800,000 through one of the top-­5 Kickstarter campaigns of the year, Brydge created its first product – a sleek, design­focused Bluetooth keyboard for the iPad which combined the productivity of a laptop with the functionality of a tablet.

Taking this niche brand and turning it into a multi-­million dollar global leader in premium tablet accessories however, was the work of Australian duo, Toby Mander-Jones and Nicholas Smith, who took over Brydge in early 2014 with a vision to transform it into a premium technology brand with a global presence.

That year, Brydge launched the highly successful BrydgeAir (now the Brydge 9.7) range, which was quickly recognised as the leading keyboard for the iPad Air 1 and 2 by industry and customers alike. It wasn’t long before Brydge had established a customer base in both retail and online that spread over 100 countries.

In 2015, the company completed a US$3.8 Million Series A venture capital fund raising from an Asian-­based fund in order to facilitate growth, and recognising the USA as the largest consumer tech market in the world, moved its headquarters to Park City, Utah in early 2016.

What has Brydge achieved so far?

In January 2017, Brydge announced the Brydge 12.3 – its first keyboard for the Microsoft Surface Pro 3 and 4, which uniquely included additional SSD storage, earning it rave reviews and another–CES Innovation Award in January 2017.

With a mission to push the boundaries and bring innovative features to everyday computing devices, The company has seen 200 percent year-on­year revenue growth since 2013, and saw a 500 percent increase in bricks and mortar retail sales in 2016 alone. Brydge was also recognised in 2016 as number 1,542 on the Inc 5000 list of fastest growing companies in the US and number 9 in the Computer Hardware category.

Brydge has also boasted the number 1 selling iPad 9.7 keboard on Amazon US for several months in 2017 so far and plans to expand its presence globally in the online, retail and enterprise channels in the coming years, with a particular focus on developing new markets in Asia and Europe. New product development will also remain at the forefront, as Brydge continues to find new ways to provide tablet users with the ultimate mobile computing experience.