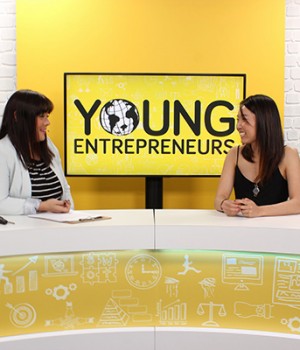 Young people have been hustling for cash for decades, but usually they’re sourcing funds from their parents, or from activities such as car washing, working in a retail store, working in fast food, paper runs and babysitting.

But today, with the advent of technology, more awareness about the opportunity to become an entrepreneur, and more support to help them on their journey, local business woman Yvette Adams says more young people are starting businesses.

Having started her first business when she was just 17, she is delighted to be showcasing them on a new TV show she is hosting called Young Entrepreneurs, which has recently been released on BRiN, the world’s first business advisor in your pocket, which already has over 9,000 downloads from 74 countries.

Nurturing young stars on the rise

“I’ve had a ball meeting these amazing young people. They were all seriously inspiring – ranging in age from 12 to 25 years and with stories ranging from being 13 and raising $20,000 in just 18 months from a lemonade stand to raise funds for Motor Neurone Disease research to creating three businesses by the time they were 25 years old and having celebrities such as the Kardashians endorse their business.

“What was particularly heartening was the fact all of them seemed to have a really strong social conscience and even though they were starting out, they were already ‘giving back’ and making this a part of the very fabric of their business,” says Adams.

Having skipped uni and starting her own business at 17, Yvette says she knows exactly how it feels to slog it out in a world of adults who under estimate what you’re capable of, hence accepting the offer to host her own show.

“I’m really passionate about supporting anything involving youth, education and technology so working with the team from BRiN made a really good fit.  And I’m just loving giving these young people the airtime they deserve. I hope the show will inspire more young entrepreneurs, and even those who aren’t under 25. If these young ones can do it with little to no initial funds, business experience or contacts, anyone can do it!”

The show is accessible on the BRiN app for free for Apple users only, with an Android version due out early next month.

Adams filmed four episodes in Sydney in July and will film a further six shows next month.

Check out the Young Entrepreneurs trailer below