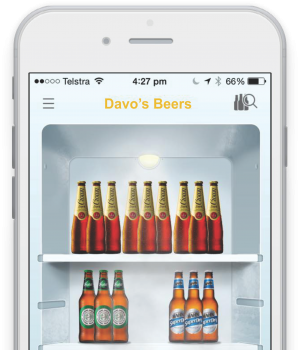 Beer Pal, a recently launched app that collects beer specials from over 5,500 stores all over Australia, lets shoppers know where they are on special and at what price.

Users simply load their five favourite beers into their virtual fridge and when they are ready to buy, the app instantly shows them where they are on special, and it even has store maps.

Beer Pal, which is available for both iPhones and Android devices, also allows stores to upload their additional specials into the system for just 25 cents per day.

What is the story behind Beer Pal?

Founder Paul Cameron came up with the idea after recently leaving a marketing job at Carlton & United Breweries and in turn a generous monthly free beer allocation.

“For the first time in years I had to buy beer!” he told Anthill.

“Like everyone I have a few favourite beers, but when I’m at the bottle shop and the guy says, ‘Sorry mate that one’s not on special this week’ each time you go back for another carton it’s very frustrating. And can be very expensive.”

“Having worked in the industry for many years I know how the system works, so I was sure that at least one of my favourite beers would be on special at a store nearby so I started checking their websites.

“Whilst I eventually could find what I wanted, it sometimes could take up to 10 minutes going through them all, and if I was not at home their mobile websites took even longer to find specials.

“That’s when I thought, ‘What if there was an app for this? An app that would show me instantly where my beers are on special.’ And that’s how it began!”

How is Beer Pal doing so far?

Paul revealed that Beer Pal has had over 15,000 downloads so far and is growing every day, he’s aiming to reach over half a million downloads within the next three years.

“The Beer Pal for Stores desktop portal is a particularly good achievement as it enables me to keep the app free while the stores can pay to have their in-store specials loaded in to the system for just $7.50 per month. They can also compare their prices live in the system and do price checks of competitors’ specials,” he said.

“There’s over 1.5 million cartons of beer purchased each week in Australia so Beer Pal has the potential to save over $10 million per year for beer shoppers.

“It’s the future of beer advertising and it is here now.”