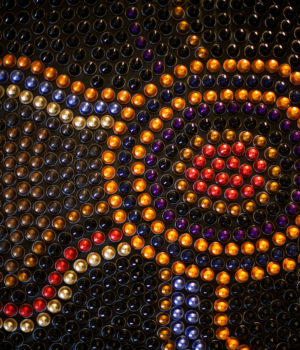 Our story began back in the late 1930s when Balarinji co-founder and my partner, John Moriarty, was born to a Yanyuwa mother and Irish father in Borroloola in the remote Gulf of Carpentaria, Northern Territory.

Because his skin was paler than his mother’s, John was taken from her at the age of four as part of the now infamous assimilationist policies of the Stolen Generations. It was a government strategy to eradicate Aboriginality.

After 10 years, at the age of 15, John would find his mother again briefly in Alice Springs, only to be immediately separated once more due to them both being Wards of the State. It was not until another 15 years later that John would have the wherewithal to return to the Gulf, to be reunited with his family, culture and country.

In 1983 we established Balarinji in an environment vastly different from now. Opportunities for Aboriginal design in the public sphere were non-existent.

Balarinji is the skin name of our two sons. Skin names denote a classificatory system that orientates people to land and relationships – to belonging. Along with our daughter, we are an Indigenous Australian family.

The Indigenous narrative is understandably core for our family and our business. We are an Indigenous Australian-owned design agency driven by social change.

But why does this matter to other Australians?

In 1993 I woke up at 2 o’clock one morning with the idea to paint a Qantas jumbo jet. We deeply wanted Indigenous story to matter to one of Australia’s biggest brands on the global stage. It was not essentially about an aircraft flying high with our work. It was a restorative statement by an icon of the nation that had taken John from his mother.

It was both a personal and a public way to challenge that abhorrent intention of cultural cleansing. It became a powerful acknowledgement of Australian identity, and four more Balarinji art aircraft followed, the most recent in 2018.

This Qantas initiative was a seminal moment. When it comes to design of major projects, such a moment has been missing. The Aboriginal narrative has never been seen as important.

But there is a shift happening

Organisations are beginning to see the value of including culture in the social, environmental and economic triple bottom line. There is starting to be a greater understanding that culture is a powerful determinant of success – whether it’s the culture of the social groups we belong to, the teams we want to work in, or the collective beliefs we hold as a society.

Through Balarinji we are working with some of Australia’s leading organisations to showcase local and meaningful Aboriginal narratives. Whether this is activating Aboriginal design and artworks for railway stations, installing sculptural pieces in parklands or painting 747s with eye-catching artworks, we have moved the goalposts on the traditional consultation engagement methodology to share cultural value.

We are activating voice in completely new ways, using deeply collaborative methodologies to bring local Aboriginal communities together to decide what stories should be told and how.

For instance, Balarinji collaborated with the Redfern Aboriginal community to art direct and facilitate public art themes and concepts for the 2019 Redfern Station improvement works.

As well as being Gadigal Country, Redfern is considered the epicentre of Aboriginal urban culture in Australia today. It is often referred to as an Urban Homeland. It was important to ensure the Aboriginal community had the opportunity to depict the diverse cultural and contemporary stories that best represent them.

The result was the incorporation of Redfern’s rich Aboriginal culture into public art and interpretive elements at the station. Balarinji approached the project by workshopping, commissioning and supporting the curation of artworks by community-endorsed local artists telling stories specific to Redfern.

This is far removed from just hanging a token piece of Aboriginal art on a wall that is unrelated to place. Linking design and public art directly to a site has a deeper meaning than geographical accuracy. Aboriginal people have a profound spiritual connection to land and place – to Country. Linking local Aboriginal stories to public art and embedding them into the built environment, makes the idea of Country more accessible to the general public, aiding  reconciliation, understanding and cultural identity for all Australians.

It’s taken us 36 years at Balarinji to arrive at this point, and there is more work to be done to give greater visibility to the Aboriginal narrative. We will continue to work with organisations to activate cultural design principles and one design element and artwork at a time, we will continue to shine a light.

Ros Moriarty is a business owner, social investor and author. She is Managing Director and Co-Founder of both Balarinji and the Moriarty Foundation. In 2018 Ros was appointed the Independent Chair of the FFA Women’s Football Council. She is an inductee of both the Australian Design Institute Hall of Fame and the Australian Businesswomen’s Hall of Fame.

Her Board appointments have included Menzies School of Health Research Darwin, the National Gallery of Australia, Australian Major Events SA and the Australian Academy of Design. In 2015 Ros was named Winner Business Enterprise in the 2015 Financial Review/Westpac Australian 100 Women of Influence Awards. 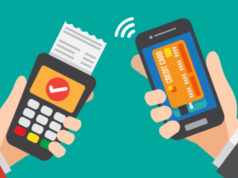