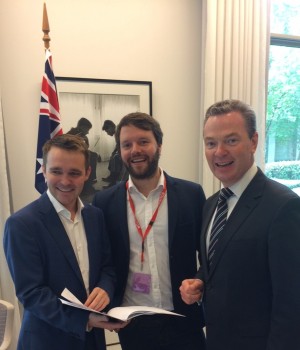 StartupAUS, Australia’s peak advocacy group for start-ups, recently released its report on the outcomes of the Federal Government’s innovation Policy Hack which was held at Sydney startup accelerator BlueChilli on 17 October.

The Policy Hack outcomes report were officially presented to the Minister for Industry, Innovation and Science, Christopher Pyne, and Assistant Minister for Innovation, Wyatt Roy, at Parliament House in Canberra.

The report synthesises the work of some 150 Policy Hack participants from all over Australia. The diverse group drew on expertise from entrepreneurs, investors, industry, government, and interest groups.

The document outlines in detail ten possible solutions to accelerate the growth of Australia’s innovation ecosystem, which include:

1. Connecting Australia’s established enterprises to start-ups through an innovation accord, an innovation precinct, and through the extension of the R&D tax incentive.

2. Improving social enterprises by creating the Academy for Sustainable Community – a nationally co-ordinated strategy that is delivered locally around the country to provide communities with the skills to leverage digital inclusion and build social enterprises through the NBN.

3. Achieving gender equality by providing a $100 million Federal Government co-contribution fund for female-led ventures, and a detailed program for male ‘champions for change,’ where men support women in the ecosystem by putting their money and brand on the line.

5. Incentives to attract capital and improve startup quality including matched funding for accelerators and incubators, and income and capital gains tax incentives for early stage investment.

6. Encouraging universities to engage with industry byboosting research and development funding to universities and tying it directly to engagement with industry, as well as a funding increase of $300m to encourage strategic staff and student secondments in tech-based companies.

9. Improving education through planting the seed of innovation inspiration at the earliest stage of educational development, primary school. ‘Lemonade Day’ is an opportunity for children to own and operate their own venture – a lemonade stand.

For the good of Aussie start-ups

StartupAUS Head of Strategy and Advocacy and author of the report, Alex McCauley, said, “This report provides a window into an area of economic policy which is of vital importance to Australia, but which is a bit opaque for a lot of people.”

“At its core, innovation policy is about trying to create jobs and boost economic growth, by encouraging modern technology and flexible, creative business practices.

“The best businesses have always been innovators. It’s time for Australia to embrace that innovation and seek to capitalise on the very great rewards digital technology offers.

“That’s what this hackathon was about – the best minds in the business helping to develop policies to modernise Australia’s economy.

“Recently, we have really been ble to feel a change in the national conversation about our economic future. Innovation policy is now front and centre. There are no silver bullets, and Australia is playing catch-up in this area.

“But we’re starting to really build up some momentum and we’re confident we’ll see some very positive initiatives like these in the near future.”

Assistant Minister for Innovation, The Hon Wyatt Roy MP, said, “The Policy Hack was a fantastic day, especially for the way we were able to bring together our entrepreneurs, innovators, educators, scientists, researchers – and public servants.”

“It’s exciting to see disruption to the traditional policy-making process, with some of those ideas now finding their way to the next level of government.”

CEO of BlueChilli and facilitator of Policy Hack, Sebastien Eckersley-Maslin, said, “A great startup mantra is “get s**t done.” I’m excited that we have this attention at a senior level in government and Policy Hack enabled people who generally don’t have a voice to work direct with government bureaucrats and members of parliament on how to shape Australia’s start-up future.”

The ACS, the professional association for Australia’s ICT sector, have also come out with a supporting statement on the release of the outcomes of the Federal Government’s innovation Policy Hack.

President of the ACS, Brenda Aynsley OAM, said, “ACS urges serious consideration be given to StartupAUS’ Policy Hack outcomes document which outlines initiatives across 10 activity areas to foster increased innovation and to boost the startup ecosystem.”

“ACS is particularly supportive of initiatives to boost gender equality and greater female participation in startups, and also initiatives that encourage children to pursue STEM based professions and introduce them to the concepts of innovation and entrepreneurship.

“Australia desperately needs to nurture a generation of professionals and entrepreneurs fully equipped to capture the opportunities of the digital economy. ICT skills, imagination, creativity and a greater appetite for risk must sit at the core of this generation. 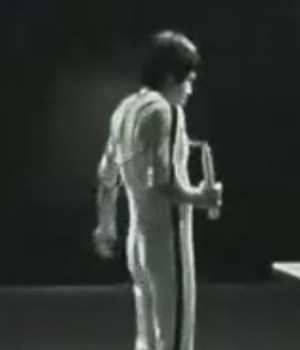 How to create your own Facebook app to save the world