Google’s acquisition of SocialDeck at the end of August made it the 11th social media-related company Google has snapped up so far this year – five of them in August alone.

The buying spree raises questions as to where Google is heading with its much-anticipated play in social networking, particularly as many of the recent ones, including SocialDeck, are gaming specialists, suggesting that Google sees gaming as a cornerstone of its social media aspirations.

There is value in this but what Google needs, and what is not yet evident, is a coherent strategy for social networking that pulls together the disjointed pieces of its growing social media portfolio.

A large but scattered base of social media assets

The absence of a well-defined social media strategy is particularly conspicuous because Google has proven so adept at harnessing other parts of the digital media value chain, and in areas that are not its traditional core capabilities – notably mobile device platforms, applications, and more recently Internet TV.

Social networks are important for Google because they have potential capabilities that are at the heart of its overarching strategy: to harness advertising revenues. Stronger ones are also showing promise as software and services platforms, as demonstrated by Facebook and Twitter, while the increasing emphasis on mobile is also aligned with Google’s interests.

Google already has numerous social media assets to draw on, but the problem is that they are largely fragmented, with no underpinning framework or a front end to pull them together beyond search. The most obvious social asset is Orkut, which has more than 100 million active users worldwide.

Alongside this there is Google Friend Connect, an OpenSocial application for connecting social and non-social websites. Other related assets include Google Groups, Google Blog Search, Google Profiles, and Aardvark for social search.

Google can also add location-related services to the social mix: Google Latitude, Maps, Street View, and Buzz. Then there is YouTube, which, while not strictly a social network, does major on user-generated content and has community features.

Gaming can help Google’s assault on social networking, but it is not a magic bullet

Google has been adding to this arsenal through acquisitions, a process that accelerated during August and where the emphasis was squarely on social gaming, particularly mobile. The latest acquisition, SocialDeck, has built an expertise in developing social games for the mobile platform, while Jambool specializes in allowing app developers to create virtual currency systems for games to enable monetisation. The ability to monetise social games through ad revenues and an emerging inbuilt virtual goods economy is driving the supply-side trend of social gaming.

Google clearly sees gaming as an important plank in its social media strategy, and it can certainly add tactical value. Users are flocking to social games and are spending a considerable proportion of their time engaging with others in this environment, which is good for advertising. Google’s emphasis on mobile gaming is canny as social media is increasingly going mobile while mobile games already dominate app stores. Google’s location capabilities can enhance social mobile gaming further, while it will no doubt look at developing cross-platform social gaming in the future. Adding all this to the social mix could prove compelling.

While games can add value, a strong framework and front end are still required

Strong social networks have scale, thriving developer communities, big audiences, and a monetisation strategy based on advertising. This is core to Google’s own interests, and it needs to position itself in this space for defensive and offensive reasons.

Google is clearly preparing to make its move, and weaving gaming into the social mix is attractive and could help advertising revenues. However, by itself this will not be enough to provide long-term differentiation, and there are fundamental issues that Google needs to address as a matter of priority. It needs to pull its social media assets into a coherent framework with a user-friendly front end or social hub, where search can make a great contribution.

Eden Zoller is Principal Analyst and Neha Dharia an Analyst at Ovum, a company specialising in technology and advisory services. The company acts as a well-respected and trusted source of industry data, knowledge and expertise on the commercial impact of technology, regulatory and market changes. 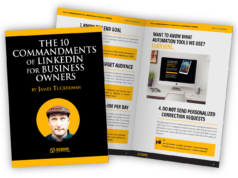 [INFOGRAPHIC] THE 10 COMMANDMENTS OF LINKEDIN FOR BUSINESS OWNERS