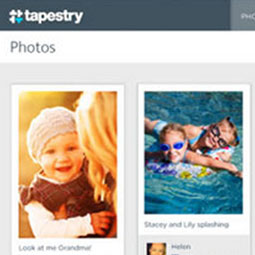 Whoever would have thought of social media exclusively for seniors? Well, here it is from a Sydneysider whose motto appears to be, “No senior left behind.”

The distinction for conjuring a social networking site for the elders goes to Andrew Dowling, a man whose worldview was transformed by a visit to China to study population demographics as part of his master’s degree, not to mention a thesis on social entrepreneurship.

As the world ages

The technology veteran with experience of working in India and the United States believes the biggest demographic trend in human history is the aging population across the world. This is reshaping our world, one that might be better served by social entrepreneurship.

Tapestry, Dowling’s venture, has rolled out an easy-to-use platform that “harnesses the power of social media to keep seniors connected to their loved ones.” Tapestry helps seniors to access photos from Facebook, check emails, the weather and other useful applications using a tablet or computer.

It also helps younger family members connect with and care for their senior relatives. Tapestry, which has a range of pricing plans starting with free memberships for a couple, plans to do a lot more because it believes tech will dramatically change the way services to the aged are delivered.

“While technology and social media have made the rest of the world more connected, many seniors have been left behind,” Dowling said, by way of explaining the rationale for Tapestry. “One in ten seniors say they often, or always feel lonely, so it’s perhaps no surprise that the demographic with the highest suicide rate in the world is males over 80.”

Dowling says Tapestry was designed from the ground up with insights from seniors. He and his team have spent the last eight months refining the platform, during a private beta phase, and conducted trials with a lot of seniors.

“We’ve been incredibly encouraged by the strong initial interest shown for Tapestry during its private beta phase and are now completely confident that Tapestry is a product that Australians will love,” said Dowling.

Why a nonagenarian loves it

The startup shared some sentiments of Ruth Moore, 83, who has been part of the trials since last August.

“I used to have a computer a few years ago, but I think Tapestry is much better for my requirements,” explained Moore, who had never previously used the Internet. “It gives me exactly what I want – contact with my family, photos, information on the Internet, and weather updates.

“I love it, but the great thing is, my family really like it too,” she added. “To be honest, I believe my 23-year old granddaughter from Tasmania is the most impressed. She can’t believe that her nan is using the Internet, let alone Facebook!”

Tapestry has also completed a trial with Wesley Mission. After the trial, 80% of the seniors felt more positive not only about Tapestry but also Wesley Mission itself, and two-thirds of seniors on the trial ended up signing up for Tapestry.

Dowling believes Tapestry has made only a modest start and technology would play a growingly important part of senior life.

“We know that more people are going to be living beyond the age of 80 than ever before, and that the existing model for aged care isn’t going to cope,” he said. “So we know there is a big change ahead of us in the way services get delivered, and that technology is going to be a key part of it.”