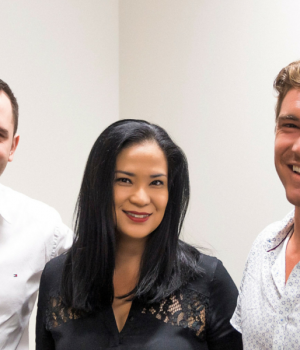 clapit, a global social media app founded in Sydney was launched with $2.57 million raised in seed funding back in late February this year to finance its future development and growth plans.

clapit enhances the social media experience using humans instead of an algorithm to amplify rich content.

In addition to sharing new content across clapit, users can ‘clap’ the content of their friends and from anywhere online, share their ‘selfimoticon’ (a fun way that humanises the selfie) and curate their own personal channel.

“We felt we were losing great content in all the clutter online. So we built a best content democracy, letting the community crowd-source the best content from everywhere else, bringing it to clapit.”

clapit is a social network for the best content from online – community sourced and bookmarked – offering a faster and more efficient way to amplify content from multiple channels. The most clapped content from the friends feed migrates to the “best” where it can be viewed by the whole world.

“clapit is an evolution beyond the arbitrary ‘like’ function, offering greater social engagement and satisfaction as users content gathers applause from the clapit community.  You clap what you love.”

Based on excitement about the strength of the concept, a successful seed round was secured from a group of influential business leaders from Sydney and the East Coast of Australia. clapit has been available in the App Store early since late February.

Who are the people behind clapit?

​CEO PJ Bedwell, trained as a medical doctor and avid surfer, had a moment of clarity in which he realised social media could be improved and joined forces with Mary Jane, the entrepreneur and Stan, the tech guy.

​COO Mary Jane Bulseco, an Australian business mogul, started at a young age. She began developing a property portfolio in her teens in some of Australia’s most coveted areas. After more than a decade in real estate, Mary Jane transitioned into children’s pay to play businesses owning one of Sydney’s most reputable and profitable kids companies.

Stan is a father of two with a Masters Degree in Information Technology, is into all of the latest gadgets and has a quirky collection of hats.

What inspired PJ, MJ and Stan to start clapit?

“We realised that there was a huge amount of great content out there on a growing number of strong networks, and wanted to bring the best of all it to one place,” the team told Anthill. “The problem was, how to figure out what the ‘best’ was.”

“The solution and our ‘Aha!’ moment was simple. Humans! clapit lets users crowdsource the best content from everywhere else into clapit.

“​The problem we are trying to solve is that really amazing content is getting lost in the clutter online. We want clapit to serve as a ‘safe house’ for our user’s most important web content. Our initial focus is the young, tech-savvy user who will get a kick out of engaging with the best content from everywhere else.

“Clapit supports the emerging; from artists, dancers, models, skate boarders, surfers, we are enhancing their social media experience through creating online communities and providing a supportive place for them to share their content.”