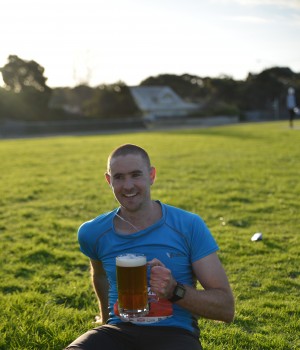 Robbie Savage loves two things: entrepreneurship and science. Scientists rarely step away from the safety of a university or government organisation, so Robbie’s decision to become an entrepreneur despite having a scientific background had its own set of challenges.

“I started a PhD in 2013 because I was determined to turn my ideas into a business, and I knew that to have credibility as a scientist, I would need a ‘Dr’ in front of my name,” Robbie recently told Anthill.

“Unfortunately, the PhD plans fell through, and I was forced to choose either starting the business immediately as a ‘Mr,’ or keep on delaying. I chose the former and have never looked back!”

His company, Human Performance Science, applies sports science for physically demanding occupations. And unlike the antisocial stereotype we have of a scientist, this entrepreneur-slash-scientist actually loves to socialise during industry events. “In the often boring world of science, having some young scientist (with no bushy beard or lab coat) explaining a new and emerging science can have a surprisingly strong effect on an audience.”

Robbie attributes his success so far to his scientific ability to break things down into a problem and a solution.

“When considering the solution, I don’t care what has been done in the past, I only care about the best course of action moving forward. Many traditional approaches to problems are outdated and ineffective. I’ve always been comfortable in breaking tradition and treading a different path.”

Now, Anthill is pleased to announce Robbie Savage, 2015 30under30 winner.

Anthill asks: Robbie Savage, what is your super power?

My superpower would be the art of transformation. I’ve trained myself to be able to ‘flick the switch,’ so I can be a serious-Rob to joker-Rob to old man-Rob in a short time frame. I believe this to be a handy skillset for the entrepreneurial pursuit, since it allows you to become the best version of yourself depending on the situation.

USE THE TWEET BUTTON AT THE TOP OF THIS PAGE. YOUR TWEET WILL SAY: CONGRATULATIONS ROBBIE SAVAGE, 2015 ANTHILL 30UNDER30 WINNER!