Predict the future of world events on InTrade.com -
Friday, January 21, 2022

I admit to not understanding many of the intricacies of high finance. After all, I studied Arts at university (and even began a PhD in US presidential history, before escaping with a pulse). They don’t tend to teach futures trading and shorting 101 between civil war battles and Nietzsche.

Now, with the advent of online prediction markets, an abiding interest in US politics can see me trading like Gordon Gekko, on familiar ground.

InTrade.com, an Irish website established in 2001, allows anyone to trade on non-sporting events around the globe. This isn’t like SportsBet. This is real trading.

For an example, let’s stay with the US election theme. When the presumptive Republican nominee John McCain chose Alaskan Governor Sarah Palin as his running mate, InTrade opened a ticket on whether she would withdraw as his running mate before election day. The market opened offering a three percent chance she would not make it to 4 November, but jumped to 18.9 percent within a couple of days as rumours of scandal swirled. Had she been thoroughly vetted? Did she use her position as Governor to have her ex-brother-in-law fired? Was her fifth child actually her grandchild? What’s that? Her 17-year-old daughter is pregnant out of wedlock?! 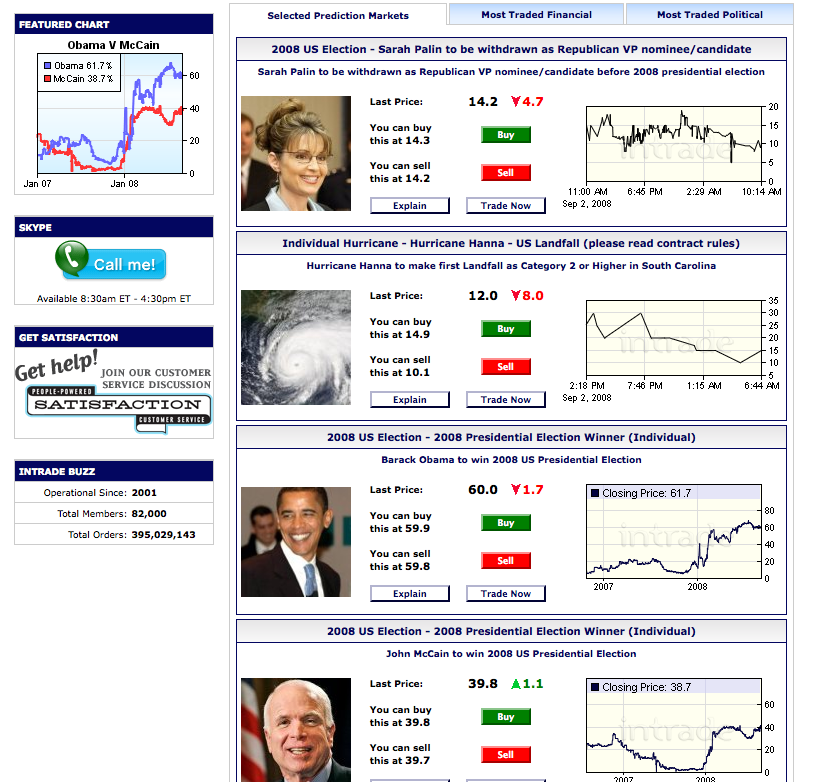 As on any sophisticated trading market, InTrade users can buy and sell on a live ticket at any time. A ticket is only closed when the proposition being traded on has either a 100 percent or a 0 percent chance of happening (ie – if Palin withdraws or makes it to election day on the Republican ticket). You just need to buy and sell at the right time. If you suspected that there were some skeletons in Palin’s closet that were likely to air, you could have bought in at three percent and cashed out at 18.9 percent. Or, you could stick with it on the hunch that she might reveal she is actually John McCain’s love-child. Or a man. Ka-Ching!

And if you want to play the game without risking your hard-earned cash, there is a “practice” section on InTrade.com, as well as on the new beta site, InTrade.net.

Forget the roulette wheel or the Spring Racing Carnival. Get some skin in the game of life. The market is never wrong. There are only degrees of right.