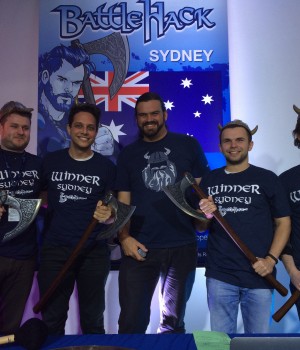 Global hackathon BattleHack was recently on in Sydney and Team GearBox took out first place with their IoT (Internet of Things) solution – a sports equipment storage locker.

The developers of GearBox will go on to represent Australia in the BattleHack World Finals in San Jose in November, where they will compete against 13 other teams from around the world for the grand prize of $100,000 USD, a cool battle axe trophy and the coveted title of ‘Ultimate Hackers for Good’.

This will be the first time an Australian team will be at the BattleHack World Finals. Hooray!

How did the Sydney BattleHack go down?

At the Sydney BattleHack, 16 developer teams were challenged to build a mobile or web application that solves a local problem of their choice within 24 hours.

GearBox is an IoT (Internet of Things) solution that allows access to the sports item, uses a timer to calculate total rent and provides payments through PayPal.

A chance meeting of brilliance

Anthill has learned that the members of Team Gearbox didn’t know each other before BattleHack, and actually all randomly met on the morning of BattleHack Day 1.

And they went on to win? Wow, this sounds like it’s straight off a movie script…

“I met Tom after my first freshly squeezed juice and before my third pastry and we clicked straight away talking about our backgrounds and how impressed we were with the BattleHack setup,” Michaelides revealed.

“Everyone was meeting each other, and we stumbled across Michael as he walked through the entrance, and we agreed on the importance of getting a mix of skills bases in a team,” he added, “On that note, we introduced ourselves to Andrej who was a latecomer and asked if he wanted to sign up as well.”

Michaelides, who enjoys working with UX/UI, comes from a law and tech background with a focus on intellectual property commercialization. His programming background is in Ruby.

Barlow is a software developer, having developed professionally in Android for about three and a half years and Frauenfelder is an architect from Melbourne but has been very interested in coding as a tool for generative art and architecture.

Griniuk is from Lithuania originally and for nearly two years, he has been living in Sydney and working as a PHP developer for an Australian start-up called ManageFlitter – a third party Twitter app helping to manage and grow large Twitter accounts.

How did Team GearBox come up with this winning idea?

Once they settled as a team, they sat down at a table for some good old brainstorming.

“Chris had the original idea of flashsports, which was kind of going to be like a geo-located meetup for people to play pickup games of soccer or cricket or whatever, so you could quickly and easily find someone to play sport with locally,” Barlow disclosed.

“After a bit of discussion we extended the idea to having boxes of equipment that you could unlock via the app to get sporting equipment,” he added, “I happened to bring a Raspberry Pi and a couple of arduinos, and we thought it would be really awesome if we could make a prototype box and demonstrate it on-stage.”

On what problem their app solves for its users, Griniuk said the GearBox app is meant to encourage people to play sport games together by making it super easy to rent sports gear.

Barlow pointed out that it also makes good use of often ignored public sporting areas.

The guys are excited to be the first team to carry the Australian flag to the World Finals.

“Australians have a history of creating really innovative products that have changed the world: The bionic ear, WiFi, the black box, and plenty more,” Michaelides remarked, “The real question is whether we can do it in 24 hours? I think we can, Australians always hit above their weight on the world stage.”