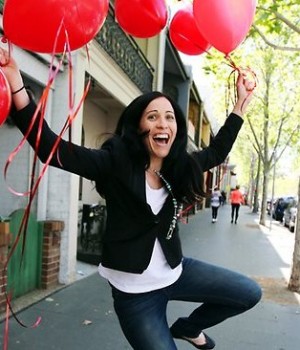 Most founders who have worked hard to build highly successful businesses struggle with handing over ‘their baby’ to a new CEO when looking to step away from the day-to-day running of the company.

Take note though that it’s most… not all.

There is a company whose succession plant has gone so smoothly that in the new CEO’s first financial year, the company achieved its highest ever transactional growth of 40 per cent.

The company is RedBalloon and the CEO is the remarkable Kristie Buchanan.

How did Kristie Buchanan become CEO at RedBalloon?

Following a stellar marketing career in the competitive world of consumer goods, Kristie joined RedBalloon as marketing manager, where she worked her way to the top.

“When RedBalloon founder Naomi Simson made the decision to hand over the CEO reins, I know it was a well-considered one,” Kristie remarked, “After all, she was handing over her baby and wanted to ensure that the legacy of what she had created would live on.”

What has Kristie Buchanan achieved as CEO at RedBalloon?

In her two years as RedBalloon CEO, Kristie has not only achieved the challenging task of taking the helm, as operational head, but drove RedBalloon to its first million-dollar day on Christmas Eve 2012 (where a transaction was made every 3.3 seconds), its 2 millionth sale in 2013, and a 40 per cent transactional growth in the 2013 financial year – its highest ever.

However, that’s not all there is to her story – in the midst of all this intense growth, Kristie has also managed to keep the employees at RedBalloon very happy and motivated.

In 2012, RedBalloon came second on the BRW Talent Magnet list, behind only Google, and in 2013 got a top-50 listing on BRW’s Great Places to Work for the fifth consecutive year.

85 per cent of RedBalloon employees rate their employee experience a 9 or 10 out of 10.

Furthermore, RedBalloon consistently achieves outstanding Net Promoter Scores: 1 million Australians have given RedBalloon a recommendation rating of 9 or 10 out of 10; and 90 per cent of its experience providers would recommend RedBalloon to other Aussie businesses.

With such a highflying performance with RedBalloon so far, we were keen to learn exactly how Kristie has managed to pull off this great feat. Below is what she shared with Anthill.

To what do you attribute your successful succession?

At a strategic level, we have maintained business stability, high employee engagement scores and a company-wide belief in a new vision under my leadership.

From a more operational standpoint, I attribute the successful succession to three things.

The first is trust. I understood that whilst I had built a large degree of trust from my years leading the RedBalloon marketing team, I needed to earn trust in my new capacity as CEO.

I shared dashboards to keep Naomi on top of the detail without having to drive it.

I met with Naomi every second week in the first 12 months to demonstrate that I was doing the operational worrying now and everything was on the list!

And, I delivered. Nothing builds trust faster than doing what you said you were going to do!

The second is alignment. I made it a point to include my predecessor Naomi on the journey, aligning on new strategic shifts and our new vision.

And the third is communication. Clear expectations were set and we have always maintained an open and transparent feedback loop.

If something wasn’t working, if role responsibilities got blurred or if there were any misunderstandings, we addressed them immediately, respectfully and often with a healthy dose of good humour.

What challenges did you face? How did you overcome them?

It can be lonely at the top! Rationally, you understand it’s a team effort, but as CEO the weight of the whole company bears down heavily on your shoulders and this was my biggest adjustment in the first 12 months.

I overcame this by making a conscious effort to extend my network of other female CEOs. Who better to help give me perspective on my challenges than others in a similar position?

Another challenge for me was learning how to work with a formal board of directors.

I wasn’t given a guidebook on how to write a management report, nor how to conduct myself in the board room. So I read a lot, especially various AICD (Australian Institute of Company Directors) materials and leadership articles.

I also sought direct feedback from the directors themselves.

If you met a new CEO who would like to emulate the success you have had at RedBalloon, what tips would you give them?

Seek feedback early and often. There is no better way to know if you are meeting expectations than by asking those around you, especially your direct leadership team and the board/owners.

Create your own path. Don’t seek to be the leader that you replaced.

I have learned and accepted that there are many shades of strong leadership, so make your mark! What legacy will you leave behind? What will you be famous for as CEO?

Set a new vision and rally the team behind it.

Stay curious. You’ve been promoted to CEO for your strategic ability and broad corporate mindset, so maintain your curiosity.

Keep learning and you’ll keep developing into the CEO you seek to be.

Lastly, be authentic: Engage the business and your leaders with authenticity, transparency and above all, don’t be afraid to let them see you’re human.

If people connect with you authentically, you’ll find them much more likely to jump over the trenches with you when you say, “Let’s go!”