Earlier today, Google made one of its most useful online services, the Sydney-developed Google Maps, even more useful for Australian users by adding current traffic information to several cities.

According to the official Google Australia blog:

Traffic information on Google Maps will show you the current traffic status of many motorways, major and minor arterial routes in Sydney, Melbourne, Brisbane, and smaller areas like Wollongong, the Central Coast, Geelong, the Sunshine Coast, and the Gold Coast, to help you avoid congested areas and plan the best route from A to B.

Click the “Traffic” button near the top right-hand corner and a coloured overlay appears on the roads where traffic is being monitored. The colour of roads corresponds with the speed of traffic relative to the speed limit. Red represents “heavy congestion” and red/black is stop and go traffic. 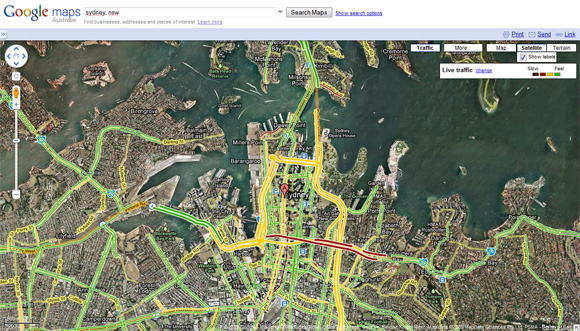 The service is available via web browser and, of course, internet-enabled mobile devices. In fact, Google is augmenting the traffic information supplied for Google Maps by data provider Intelematics Australia with ‘crowdsourced’ data drawn from commuters who share their GPS information anonymously. Motorists who activate the “My Location” feature on their GPS-enabled mobile devices can send anonymous data to Google about how fast the device is moving.