The democratisation of entrepreneurial funding - Uhhhmmm, What? -
Wednesday, February 19, 2020 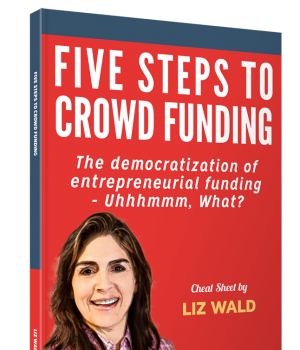 Yes indeed my friends, no longer do you have to have a “rich uncle”, or sell your soul to the venture capitalists to get funding for your dream. Thanks to the internet, some creativity, and the basic drive of human nature to strive for something new, crowd-funding has arrived.

Liz Wald, Vice President of International for Indiegogo.com was interviewed by your “Not So Freaky University” team. Ms. Wald has been terrifically successful raising funds through the crowd model. One of her successes was when she successfully secured a USD4 million national health grant for muscular dystrophy by biking across the United States.

She has also illuminated some interesting data that will help us to unravel why some crowd-funding efforts do well and why others die a slow death. There are five steps she has discovered that will dramatically increase the odds of a successful funding campaign.

You must have a plan. Define the “Who” of the project. Just like in Marketing 101 you must know your target audience. Who will be interested in what you are doing.

Then identify “Why” you’re doing what you’re doing. This is selling at the most basic level. Selling yourself and the idea is why people will fund you. The crowd wants to know that you will really go through with this thing if they give you their hard earned cash.

They want to know that you have had this dream forever, truly thought through this thing, planned it out and that you’re passionate enough to potentially make a fool of yourself in front of everyone you know…THAT is why you’re doing this, passion.

The strategic direction under this step is one of the most important aspects of the project. In my more than 20 years experience in business I have found that it is the people that will make or break the business.

You can have the best product, the best sales people and be positioned best in the market, but if the “Who” of the project is not well defined, the project will fail.

People, those you are selling to and those who are doing the selling and manufacturing and distribution of your products, will make you succeed or they will make you fail.

Encourage, inspire, and gain the respect of the people of the project and you will be successful despite your weaknesses as a manager, financier, or even human being. If you can get people to follow you and embrace your vision…all things are possible.

ACTION: What is your strategy? “Why?” are you doing what you’re doing?

Step 2: Have a Compelling Video

Liz has discovered that “…from over 200,000 campaigns … a campaign with a video, on average, raises 114% more money than a campaign without a video.”

114% more funds with a compelling video..THAT’S impressive!!! So, just breakout your iphone and shoot right..Wrong!!!!! This video should show you, the “asker for money” person. It should also not be just about your idea or product.

You should write a script for the video, practice the script…talk about the script with your closest friends. Ask them, “..is this compelling?…”

An example of this concept was my father-in-law. I guess now he’s my ex-father-in-law, but never mind that. He grew a business using network marketing to the point where he achieved 20,000 distributors. The parent company then tried to institute policies that would restrict his business and force him and his customers to submit to higher fees and hence higher prices. He told the parent company no, took his distributors from them, and created his own company in Europe effectively becoming competition.

Then for the next 7 years he began a steady process of taking market share. How? His family created inspiring videos in the basement of their 13th century mansion in Luxembourg, sold them and distributed them and grew the business to be a multi-national company. All this, with compelling videos, persistence, an effective vision, and the right people.

Say, “action!!” with the video and “hook” your audience to the project.

ACTION: Make a video. Start with a script of what you want to say, practice it, then shoot.

A “perk” is something given in exchange for the person’s contribution to your campaign. If you can engage the person that is participating in the campaign to be part of the project then that’s the best perk of all.

One example of how successful this concept is was the crowd-funding of a movie in Australia called, “Me and My Mates vs The Zombie Apocalypse”. Cool title huh.

So the guy seeking funding for the project presented it this way:
A. For USD220, you can be a zombie in the movie
B. For USD1,000, you can be killed
C. For USD25 you get a download of the movie
D. And my personal favorite, for USD5 you get your name in the credits

Another example of a perk is a beta tester. People who are beta testers get to access the product, software, game, device, gizmo first for their contribution. They get to fiddle with the “thing” before anyone else. People will pay for that.

Think of your project. How can you get your network to participate, engage, and get excited about giving you there hard earned cash?

ACTION: Design Perks for your contributors. Be creative about your offerings to your network of contributors.

Step 4: Engage the network that is closest to you

Reach out to your most immediate network to fund you first. Build an email list or database of the people closest to you. In other words, if your Mom and Dad and close friends don’t fund you, why should a stranger. Harness the power of your friends and family.

Liz has found that e-mail drives produce 20% more dollars than any other form of marketing. Approximately 30% of your funding comes from your closest network, the next third is when your network shares with their network and the final 30% of your funding is when the platform amplifies. The word gets out and then really interesting things happen…Or not.

Another interesting aspect of email marketing is that when people make a contribution it’s not a pledge but actual money and you get their email address immediately so in the future you can approach them further and say something like, “Hey, for XYZ, you’ll get another one…”

I really appreciate the word “engage” that keeps coming up in this funding model.

“According to Webster’s dictionary, engage is defined as:
To hire (someone) to perform a particular service; to pay for (help, services, etc.)
To get and keep (someone’s attention, interest, etc.)
To start fighting against (an opponent).”
Source: http://www.merriam-webster.com/dictionary/engage

There are many goals of a crowd-funding campaign. The first goal, which is a monetary goal, will be for you to ask yourself, “How much do I need?”.

So, using the guidelines above from Step 4, if from my existing network I will gain 30% of my goal and my goal is USD10,000, then can I get about USD3,000 from my initial group? If the answer is most definitely a yes, then maybe raise your goal a little higher. Think about what you really need and what you can realistically obtain. Statistics show that 87% of campaigns that achieve their goal OVERFUND by 30%.

For example, if you need USD20,000 but you set your goal for USD100,000 and you get the USD20,000, your audience will believe you are a clown at the circus because you have only achieved such a small amount.

There is no crowd validation of your project so the audience moves on. An example of this fact was a recent campaign for sunglasses. The sunglasses were being produced in Edinburgh, Scotland. Yes, they do have sun there, and their goal was for GBP9,000. The team marketed them as an Instagram filter for your sunglasses.

They knew they could get the first third-to-a-half without any problem but they were shocked when GBP309,000 came flooding in.

The green bar effect was that once the crowd saw these things were hot, the local news picked up the story and everyone wanted to get in. Supplies were limited and they were able to say to the market “we hit GBP100,000 and we’re going to offer a second colour”.

If they had set their goal of GBP300,000 the whole time, then everyone would have saw them as just chipping away at it instead of watching the explosion of excitement that occurred.

ACTION: Create a realistic goal. Avoid the “Green Bar Effect” by creating a goal that is realistic and let your network see your funding grow to create excitement about the project.

So, sports fans, Get Crowded…fund that dream!