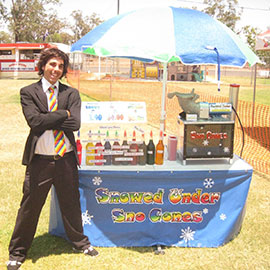 Chris Von Wilpert says his business has operated under the radar most of the time. He couldn’t be more right when he says, “Our business is rarely ever featured in the press.”

But his snow cone business, recently rebranded as Snowy Joey, may have just earned some well-deserved attention.

The 24-year-old’s virtually one-man business has reached a landmark $100,000 in money earned for its customers – predominantly schools and sports clubs that let Von Wilpert set up snow cone stalls at a variety of events, delighting children and raising funds, too. At every event, Von Wilpert gives back to the school or club 50 cents for every snow cone and fairy floss sold.

After seven years in the business – Von Wilpert started straight from high school – he is getting ambition. Von Wilpert wants to license, or franchise, his business model and spread it across the country.

“I want to be known for helping schools and clubs raise money through more than just snow cones – I want to give them specific tools I use in business to help with their fundraising,” says the young man, who plans to launch his fundraising idea in September.

Von Wilpert says his business model is still “all about giving back,” and his new fundraising idea can help raise $1,000 in 30 minutes.

“Our business consists of three main parts – fundraising, hire packages and the sale of snow cone syrups. For fundraising we are still running a for-profit business, but our policy is to donate money from every serve we sell back to our customers at club and school events,” he says.

You just have to drive in

The hire packages (Snow Cone, Fairy Floss & Popcorn) are for corporate customers like Bunnings, Zupps, Telstra and Griffith University, besides private parties and weddings. His company also sells its own range of snow cone syrups for private and business use.

Von Wilpert’s operations are simple. He currently has 11 mobile snow cone stands that can be transported in a standard-sized car to events all over South East Queensland. The setup fits under a 3x3m marquee and is completely self-sufficient and doesn’t even require power.