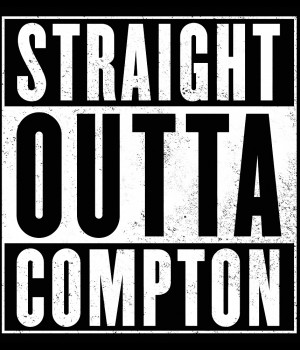 After deciding to go on a random date night with my wife we lined up at the cinemas to see the latest blockbuster Straight Outta Compton, a biopic about legendary rap group N.W.A.

It was supposed to be a night off and an opportunity to unwind after working 13 days straight. But as with many entrepreneurs this was easier said than done.

Growing up in an Aboriginal family and in a housing commission area I couldn’t help but relate to the story on a number of levels. The social challenges, racism and self-doubt to name a few.

But as the movie went on I drew a connection with the lessons that all entrepreneurs can take from the story. In a classic rags to riches story here are the nine key lessons I took from the story.

1. A strong vision is essential

Without a vision any strategy would be useless. A vision brings together a team who share a purpose. It is with this purpose that people can push through the challenges of business.

Rarely is a vision something that is easily measurable. Take Apple for example. Their vision statement is simply ‘To Leave a Dent in the Universe’.

The boys from N.W.A also had a big bold vision. It is often said that they redefined the direction of hip-hop. The music was more upbeat and spoke about the truths of their surroundings. This was the message that they wanted to deliver to people.

2. Values are your brand

Think Mark Bouris and Yellow Brick Road. His content and across all media is about reducing your mortgage and building wealth.

Their core product is home loans that compete with the big banks, a business model that allows rapid franchise growth by having low barriers to entry for new franchisees.

These are all aligned with the mission to give All Australians access to quality financial advice. Not to mention the fact that you’ll only see Mr Bouris in a black suit and tie combo.

N.W.A built a following by having strong values and ultimately a recognisable brand. One of the biggest reasons is they had actually experienced what they wrote about.

In a musical era where it was common for artists to have their lyrics written for them N.W.A were able to come across as authentic with their content.

The clothing, the lifestyle the controversy all had that element of N.W.A about it. A business should always be an extension of the entrepreneurs own self and you can feel the essence of each member in everything they would do.

3. It’s NOT all about the money

You could go as far to say that it’s not about a salary it’s all about reality.

Sean Parker has famously said ‘You have got to be willing to be poor as an entrepreneur.’ Janine Allis founder of Boost Juice was drawing a salary of $30,000 per year when she was listed on the BRW Young Rich List.

This is highlighted very well in the story when Dre walks away from Death Row Records. Suge Knight declaring that he will own everything and that Dre would be taking no-one with him. Dre backed himself and his talents.

In 2014 Dre was listed in Forbes as the richest man in hip hop.

4. Surround yourself with people who strengthen your weaknesses

There is no better example of this then Mark Zuckerberg bringing on Sean Parker to take Facebook to the next level.

All members of N.W.A complement each other so well. Ice Cube and MC Ren provide the slick lyrics. Dr Dre with the beats and Eazy-E with the charisma and distinctive delivery.

Even towards the end of the film Dre got in new talent in the likes of Tupac and Snoop Dogg to complement his back beat sounds. We all know what a success this has been.

5. Get the right advice

This is particularly true when thing start to get real. When you start having conversations with investors don’t just rely on their information. They’ve played this game before and know all the tricks. Even looking as though they are on your team.

If you get to a point where you’re signing off a terms sheet this is when you need proper advice. An accountant or solicitor will be able to explain the dilution of your equity as well as the outcome of not hitting your KPI’s.

This was a really interesting point throughout the story. Despite having the street smarts they were really naïve when it came to the business world. Jerry Heller was a very experienced businessman in the entertainment industry before working with N.W.A. After the band broke it was often said by band members that Jerry played a divide and conquer game.

Before launching a world tour and spending money on record productions N.W.A would test their music in between sets at their local club.

This is a great example of operating under the lean start-up principles. They produced a minimal viable product to an audience and would judge based the reception and interaction from fans.

It was only when their local audience approved that they decided to scale up and go international.

The story behind the rise of N.W.A is a classic rags to riches. They got buy in from fans on a personal level as they positioned themselves as ordinary boys from Compton. The emotional outcome for their fans was hope.

Despite your upbringing and surroundings you can overcome these extreme challenges and have an impact on the world. The number of artists to come from Compton or similar locations increased dramatically after N.W.A gave hope to fans that it could be done.

The learning here is to share your brand story with your customers.

Get them to emotionally buy into your company and communicate your ultimate purpose. Customers make decisions with emotions and back it up financially. Identify the emotional impact that your business has on consumers.

Okay so maybe don’t quite party as hard as N.W.A but you definitely need to relax hard. Sir Richard Branson’s go-to relaxation ritual is an English cup of tea followed by a hot relaxing bath.

But for a really good break consider going on a cruise. Internet is scarce and if you do get it it’s at a cost of $20 per hour! This allows for quality time to reflect and to also focus on the strategic direction of the company.

Removing yourself from the day to day running of the business will let you work on growing your business and not just operating it.

From designing rockets to making the world more open and connected there is always an underlying motive. And rarely is this motive financial, because at the end of the day it’s not about the money.

This is highlighted in well in their story when N.W.A was asked by the cops not to play Fuck tha Police. The risk of playing this song was imprisonment, cancelled tours and loss of record sales. All coming with significant financial costs.

Despite all this the song was played anyway.

Not just annoy and offend people but because it was part of their vision it was part of the legacy the wanted to leave behind. They were a voice for their people in Compton and were on a mission to show the world the struggles they faced.

Sure they have all ended wealthy in their own right. But it is often said do what you love and what you’re good at and the money will soon follow.