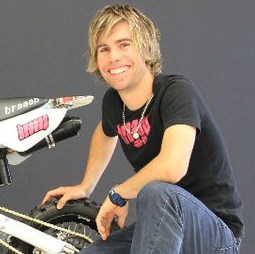 Motor bikes, in theory, should sell themselves. Bigger is better, right?

But mere profitability and conventional wisdom have never interested Brad Smith. He has revved up his big idea for small bikes (begun at age 16, reality at 18) and made braaap into not only Australia’s biggest authority on off-road bikes and motocross accessories, but the world’s largest online mini bike store. (Not to mention, the funnest brand to say out loud.)

It’s made Smith, who has been ranked as Australia’s number one mini-motocross rider, synonymous with the sport. He’s forged his own brand (make that braaaand) to incorporate a high-energy, fun-loving and optimistic lifestyle.

The dashing young Tasmanian doesn’t drink and adheres to a vegan diet. As a speaker, he advocates for riding that’s safe and within the law, and promotes “clean adrenaline rushes” to his audiences by living drug-free. (As you can imagine, he makes his entrances on bike, never failing to ignite the crowds.)

Designed in Australia and built in China — where Smith found his first manufacturer at 18 — braaap’s bikes are fully customisable and available wholesale and through retail. They include advantageous marketing features to build trust in the company, including lifetime guarantees on all bikes and affordable pricing plans.

More importantly, they come with a sense of involvement in the growing motocross community. There are specially designed tracks, training sessions, and racing series offered through the organisation.

In 2010, Smith journeyed to a conflict-torn region of Israel as part of Tony Robbins’ Platinum Partnership to organise soccer matches among youths from diverse backgrounds — “one of the most moving things I’ve ever been a part of,” says Smith. His involvement with ‘The Plats’ has also given him incentive to build up on his business strategy.

“The reason I joined this group is to be around and learn from the people who are the best on the planet at what they do,” he says. “This group all are overachievers and they hold you to a higher standard.”

Anthill asks: Brad Smith, how have you built buzz for your business?

At the braaap stores [three in Tasmania and one in Melbourne] we hold street parties. We block off the streets, bring out the ramps and do moto freestyle displays. We have school bands perform, graffiti artists, rap dancers. We attract 5,000 people. It’s a great night.

Brad Smith: an introduction to braaap