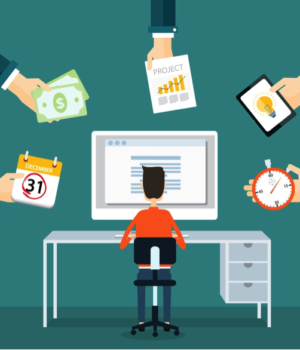 For many of us, the term ‘gig economy’ is synonymous with Uber drivers and Foodora clad cyclists. However, the independent contractor trend is now disrupting the HR and recruitment sectors, as leading global businesses take advantage of gig economy workers to meet the changing needs of their business.

Research from the Oxford Internet Institute has found projects sourced by Fortune 500 companies through online freelancing platforms grew 26 per cent between 2016 and 2017. While Australian businesses are not engaging gig workers at the same rate as those in the US and Europe – where 20 to 30 per cent of the working-age population are engaged in some form of independent work – it is only a matter of time before it becomes more prevalent in the Australian employment landscape.

According to the Australian Bureau of Statistics, about 2.5 million Australians are currently employed on a casual basis, reinforcing experts’ beliefs that this is not a passing fad but a global trend that is set to redefine the workforce.

What is driving this global trend?

Today’s modern workforce is ingrained with a different mindset, focusing more on experiences and flexibility than stability. Gig economy workers are often young people who place less emphasis on the cultural cache of a long-term career. However, gig workers could include anyone, such as professionals who have recently retired but still want to make a contribution or parents who want a more flexible working week.

For businesses, on the other hand, the hiring of short-term roles is a trend heavily driven by specialisation. Companies today are demanding more niche and specialist skills. But, employing multitudes of specialists on a full-time basis isn’t a viable business solution for most. Now, technology has made it more accessible than ever to directly connect businesses with experts to help plug skills gaps within their organisation on-demand.

As a result, what we’re seeing is more businesses leveraging this new flexibility in the workforce to become increasingly agile, adjust the size of their workforce to suit demand, and to reinvigorate themselves with new skills and experience.

The gig economy as a solution for traditional businesses

For businesses, one of the opportunities the gig economy presents is the ability to quickly scale up a workforce to tackle a project, which could require specialised skills that are not needed in the day-to-day running of the business.

This provides an incredible advantage for employers, allowing them to become more agile, adjusting the size of their workforce to suit demand and reinvigorate themselves with new skills and experience.

Gig economy workers often have a unique skill set that lends itself to project work. For businesses, these workers can include designers, programmers, content writers, developers, as well as a number of other roles. It’s important to remember, gig economy workers are not just covering junior roles but there is a growing trend for executive-level employees to be part of the new gig-based workforce. More and more, businesses are turning to COOs, CFOs, and CTOs on a short-term basis, absorbing their expertise and wisdom before moving on, creating an ‘interim executive solution’.

As such, gig economy workers provide a unique resource to supplement a permanent workforce. They can help address a business’ skills gap or labour shortage cost-effectively, as and when the business needs it. Once the work is complete, the gig economy worker will move on, removing the overhead entirely for the business.

How to adapt your business to the gig economy

Before diving headfirst into hiring independent contractors, it is essential that companies analyse how much that labour would cost in-house before they go ahead and hire gig economy workers, to ensure it is the best way to achieve their goals. Some businesses may be better off with permanent employees who have a stronger allegiance to the company and understanding of its culture, even if the process of bringing them onboard is more time-consuming.

Employers also need to be aware that a high turnover of gig economy workers could mean they do not have an accurate understanding of project costs until it is too late. Just as a high turnover of permanent staff can be expensive, if you do not have an efficient way to keep track of gig economy workers and their payments, payroll and administration, costs could balloon.

Businesses looking to adopt gig workers into their workforce need to tread carefully when it comes to industrial relations laws in Australia – most notably the Independent Contractors Act 2006 and the Fair Work Act 2009. To help businesses understand the differences between employees and contractors, the Australian Taxation Office provides some useful information on the differences between employees and contractors.

It is important that Australian businesses looking to take advantage of the gig economy ensure HR and payroll are well prepared to manage this part of the workforce. This means giving them the time and resources required to manage this frequently changing employee base. It means understanding the regulations in your market and how this will impact the way in which you hire gig workers. It means having the technology to correctly track and pay gig workers.

This preparation takes time and some experimentation, even though traditional, highly-critical HR tasks never take a back seat. It is critical businesses find a partner to help them succeed in this new world of work. One that understands the local market and the changing regulatory landscape, as well as what is required to support a workforce supplemented by gig workers.