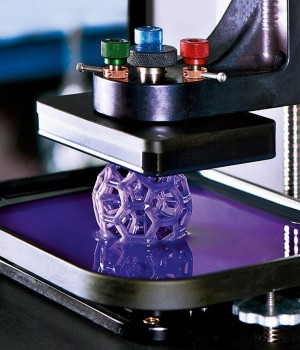 3D printing has captured the imaginations of engineers, researchers and manufacturers in ways that no other advanced manufacturing technique has done previously. In simple terms, a 3D printer can turn digital representation of an object into a physical object. Users of 3D printers can download digital 3D model files that can allow a 3 dimensional object to be printed. These 3D model files can be derived from existing objects by way of a 3D scan or they can be created independently of any real object through traditional Computer-aided design (CAD) techniques.

3D printing’s promise in terms of a rapid, sophisticated and cutting edge manufacturing technique is unequalled in the field of materials science and manufacturing. 3D printing will usher into the marketplace the next digital disruption, that of digital manufacturing and construction, a disruption that is undeniably gaining momentum.

Like any disruptive technology, the advent of 3D printing technology also raises many legal questions in the area of intellectual property. Understanding the legal issues surrounding 3D printing is more important than ever for Australian engineers who might consider using 3D printing for use during the course of their work.

What legal issues can arise out of 3D printing?

Firstly there are the legal issues that are caused by the transfer of activities in the manufacturing supply chain. For instance, our Australian IP laws are very much directed at those parties that sell, hire, offer for sale, or import products that might infringe the various IP rights that exist in marketed products.

These laws were established in this form to make it easy for IP owners to enforce their IP in their products and services against manufacturers and perhaps a manageable number of retailers. 3D printing is technique that allows end users to potentially manufacture or 3D print protected products. Thus laws that were previously imposed on manufacturers and retailers may have little effect and the laws that previously were imposed on home users may not be appropriate.

Secondly there are the legal issues surrounding new computer based design techniques and practices that have no antecedent that can be relied on with any certainty to provide guidance as to how a court may decide matters if presented with them. It is these new techniques such as algorithmically deriving designs, or the sharing of 3D model files that may embody a protected work but not be a protected work itself that are likely to challenge courts for years to come in Australia.

A person who possesses a digital file of a patented product and access to a 3D printer is one push of a button away from possessing the patented product itself. As quality 3D printers make their way into the average person’s home, the difference between having a CAD file and having the physical object will become increasingly inconsequential.

Moreover, people can print the physical object in the privacy of their office or home without the need to purchase the physical device from a mass-produced source. As a result, the distribution of a digital file that enables 3D printing of a patented invention is likely to become a significant legal issue in the coming years and the term is often referred to as “digital patent infringement” in the legal world.

The unauthorised distribution of digital fi les is likely to undermine the economic value of a patented invention. As a result the incentives that the patent system offers to the patent owner are also likely to be undermined. Therefore, unless the patent legislation can provide a framework for patent owners to exert a measure of control over the 3D printing digital fi les that could be used for 3D printing of their patented products, the incentive to engage in innovative activity may be dampened.

Presently, a patent refers to a set of exclusive rights granted to a patent applicant in exchange for detailed disclosure of an invention. Unlike copyright, a patent is not granted automatically to an inventor. Patent rights are territorial and a separate patent application needs to be filed by an applicant in each country of interest in order to obtain enforceable patent protection.

Once an invention is patented, the patent applicant has the exclusive right to exploit the invention including the right to make, hire or sell the product or keep it to do any of these things. Therefore, any unauthorised 3D printing of a patented invention is likely to constitute patent infringement by “making” the patented product. Indeed any unauthorised 3D printing of the product, even for personal use, is likely to be considered patent infringement except under some very limited circumstances.

Patents are also granted over methods and processes in addition to products. If a patent is directed to the use of something to achieve an effect, printing that something will not directly infringe the patent unless it was so used.

However, the Section 117 of the Australian Patents Act 2013 [Cth] provides that if the use of a product by a person would infringe a patent, the supply of that product by one person to another is an infringement of the patent by the supplier unless the supplier is the patentee or licensee of the patent. Accordingly, the supply of a 3-D printed object to a third party with instructions to use it in the claimed manner would probably result in infringement.

Given the difficulty in proceeding against people using 3D printing on their home based printers that could infringe Australian patents, patent owners will turn to those persons creating and distributing the 3D model computer files that allow end users to easily produce infringing products by using 3D printing.

Under Australian law, as it presently stands, creating and distributing of 3D model digital files is not likely to be considered as direct patent infringement. However the supply or distribution of the 3D model file that embodies a patented product may constitute contributory infringement. It is possible that the Australian Courts may consider that by making the 3D model file available for copying on an online platform, both the platform owner and the uploader have authorised the infringing conduct of the printing party who has downloaded the 3D model file.

Could the 3D printer manufacturer be held liable for patent infringement?

Given that there are a wide variety of objects that could be printed with a 3D printer it is very unlikely a court would impose the liability on the manufacturer or supplier of the 3D printer for the infringements of its users.

Could 3D printing change the legal landscape in the future?

The business model of IP rights owners and the legal framework determining the implementation of IP rights is likely to undergo a major transformation. For example, IP owners could grant individual consumers licence to download blueprints for products covered by the registered IP. Manufacturers of complex goods could offer 3D model digital fi les for 3D printing of spare or replaceable parts. This is just one of the many possible ways in which businesses could evolve their business models to embrace the challenges associated with 3D printing.

In summary, many challenges and opportunities will accompany the emergence of 3D printing technology. The digital nature of this development will likely challenge and tempt IP rights holders, the judiciary, and the legislature to move quickly to protect the rights of IP owners. However, slowing the development of 3D printing technology through legal restrictions is not likely to address the democratization of manufacturing that is 3D printing. A successful intellectual property regime will embrace this development, and the ideal rights holder will implement new innovations that will not have the perverse effect of stifling innovation.

Andy Mukherji is a Patent Attorney and Associate at Michael Buck Intellectual Property. Andy is a registered Australian and New Zealand patent attorney with a PhD in chemical engineering and with degrees in engineering and physics.